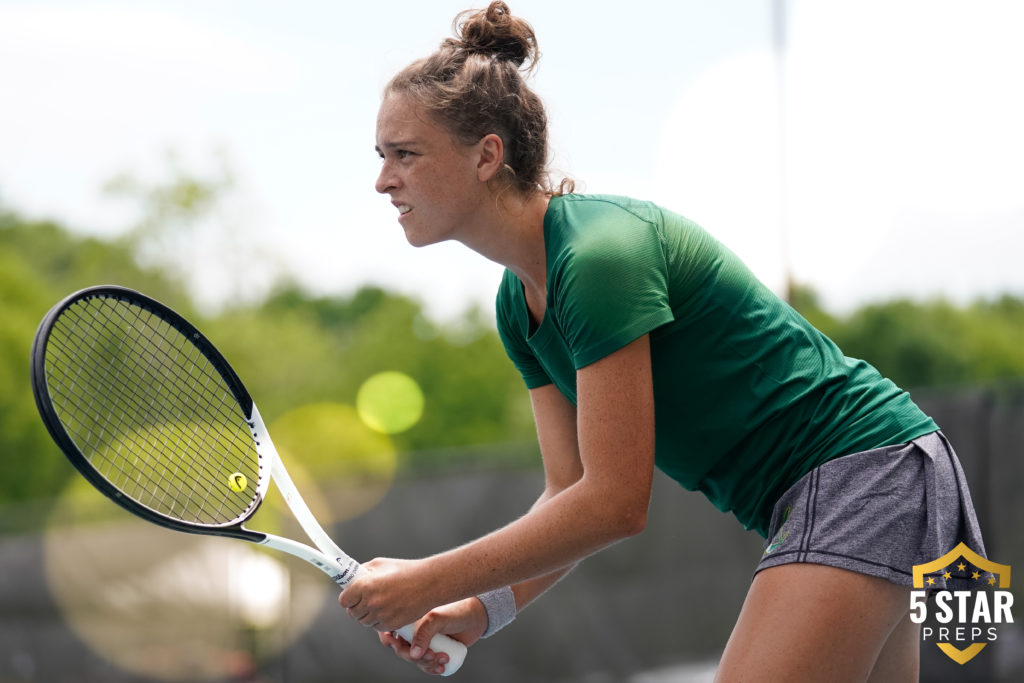 Catholic’s Maeve Thornton spends plenty of time on the road as an individual playing tournament tennis on the USTA circuit.

The Furman commitment and Class of 2023 five-star recruit embraces the change of pace in the spring, playing high school team tennis for the Lady Irish.

Alongside her teammates and friends, Thornton led Catholic to its second consecutive Division II-AA state title May 25 in Murfreesboro – and two days later won the individual singles championship for the second straight year.

Catholic beat Chattanooga Baylor for the second year in the final, winning 4-0 this year after a 4-2 victory in 2021.

“It was amazing doing it again with this group of girls,” said Thornton, who also repeated as 5Star Preps Girls Tennis Player of the Year. “It was exciting because we had won it last year and I had won the individual singles last year, so our goal this year was to do it all again, so it was amazing to accomplish that with the same group of girls.

“It showed how strong we are, and I thought it was awesome how we swept the singles and doubles. That was our goal for the season and we accomplished that, and I just love playing for the team and being able to win for the team.”

Thornton has been dominant in her high school career. She hasn’t lost a match in two years (her freshman year was cancelled because of COVID).

Thornton is relentless on the court while maintaining a calm demeanor.

“She never takes a point or a shot off,” Morris said. “She sets up every point. She’s very much like (Rafael) Nadal in the way she makes her opponent earn every point, even though she could probably win the point earlier. And she’s never going to beat herself.”

Thornton was the No. 1 seed in the Southern Closed 18-unders that took place in Mobile, Ala., this week.

She won the singles championship and then also claimed the doubles title alongside Logan Voeks. 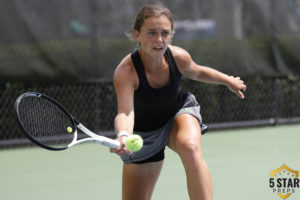 After the tournament, she leaves for a three-week trip to Europe for her father David’s wedding.

David Thornton, a native of Ireland, is a teaching pro at Knoxville Racquet Club and Maeve’s personal coach.

His fiancée is from Hungary, where the wedding will take place.

Maeve will miss the national clay courts during the trip.

“Once we get back, I’ll pick it back up,” Thornton said of tournament tennis.

First, she will enjoy the trip to Europe. The sights. The wedding ceremony.

She will play some tennis, too.

“I’m very excited,” Thornton said. “I think they have the red clay over there, so I get to hit on those, and then I’m bringing my friend with me who plays tennis so we can hit over there.”

Once she returns, Thornton will focus on training while also playing tournaments.

“I’m working on getting more fit and working on my movement,” she said, “and I’ve been doing some new workout training to get faster and stronger. And then just to play a lot of matches is my goal.”

Thornton committed in April to Furman, where former Bearden player Julia Adams just finished her senior season as the team’s No. 1 player. Adams was the 5Star Preps Player of the Year in 2018.

Thornton, who knows Adams and hits with her on occasion, said Furman was the right fit for her.

“I love the location,” Thornton said. “I love Greenville (South Carolina), and I like how it’s not too far away from home but it’s far enough away. I love the campus and I like how they’re really focused on athletics and academics. I wanted a really strong academic school, and they have really good academics, and I just love the coaches and the team.”

Thornton said she may study pre-med at Furman and possibly go to dental school after graduating.

Before then, she will enjoy her senior year at Catholic, and said she “definitely” plans to play for the Lady Irish next spring.

“I love the team aspect (of high school tennis),” Thornton said. “It prepares you for college, and it gets you matches and it gets you used to having new coaches and teammates. I just like the experience of it.”