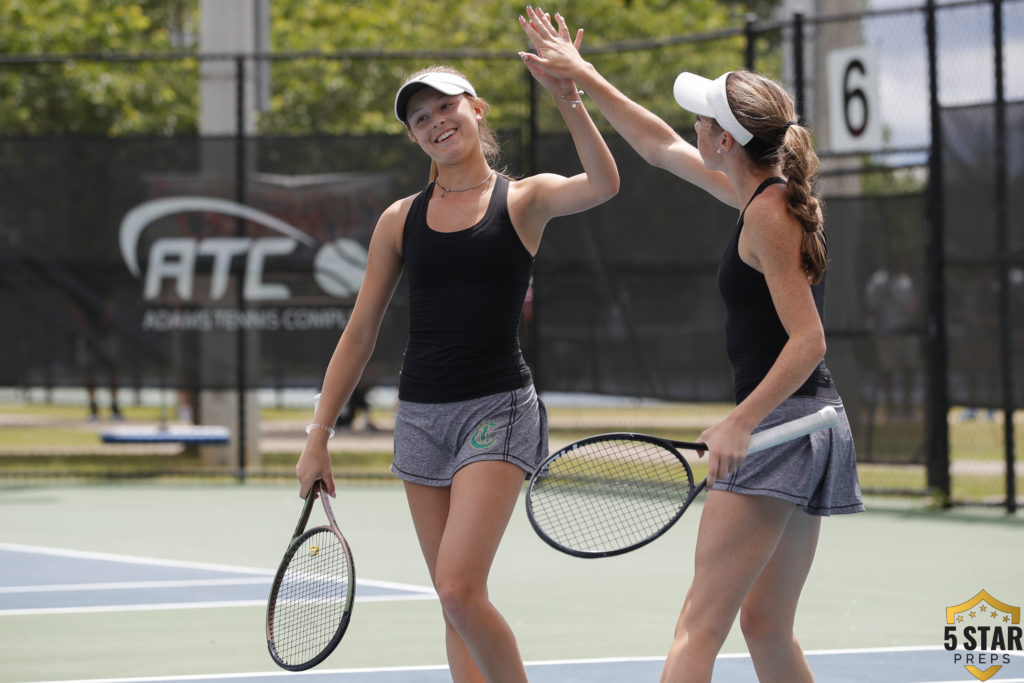 MURFREESBORO – What a week for the Knoxville Catholic high school tennis program.

Not only did the Lady Irish repeat as Division II-AA state champions on Wednesday, but they made it a clean sweep of the awards on Friday.

And then sophomore Eleni Liakonis and freshman Lillie Murphy won a hard-fought match to claim the doubles championship.

Thornton, a Furman commit, and the Catholic girls program are writing quite the legacy.

“I think her and the whole team are looking forward to the challenge of doing this again, once we get rested next year,” said Catholic coach Rusty Morris. “We know that the region we’re in, they’re going to reload with players and be looking to defeat us next year.

“So, it’ll be a challenge. And I think they’re looking forward to that.”

In Thornton’s championship match, she defeated Riley Collins of Ensworth, 6-2, 6-1.

Collins, a senior, is the daughter of former NFL quarterback Kerry Collins.

Morris said Thornton’s familiarity with Collins as an opponent helped contribute to her win, having beaten Collins earlier in the week in the state team semifinals.

“(Maeve) is such a natural leader and has such a great outlook on team sports and the game of tennis. She’s just a very positive person. So I think it’s her general makeup of who she is that allows her to handle the pressure of it,” said Morris. “She understands how to make it fun for herself and those around her.”

Murphy and Liakonis took the first set 7-5 (8) and then 6-3 in the second set to defeat Baylor’s Helen Guerry and Agda Laasko.

“Eleni and Lillie had played them in the region championship match in doubles. So they were familiar with them. But the Baylor girls, they’re always tenacious,” said Morris. “And our girls were actually up 5-1, 40-15, in the first set. We had six set points in the first set. And got to a tiebreak in that first set after being up 5-1. Got to 6-all.

“And then Baylor got up 6-3 in the tiebreaker in that first set. And had several set points. But we pulled it out 10-8, which was the whole key to the match. Not letting that comeback happen. … And then they gained confidence from that.”

Murphy and Liakonis often battle outside of school play in junior tennis. So to see them work well together as a doubles team is unique.

“To go from that to doubles partners, it shows you what kind of people they are. … They have different demeanors about themselves — one more fiery and one more calm. And that seems to work for them. They just seem to bond as a doubles team.

Catholic wasn’t the only winner in tennis this week, though.

But it wasn’t that easy.

Faulkner won her quarterfinal and semifinals with ease, too, 8-1 and 8-2.

TO SEE TENNIS PHOTOS FROM CHAMPIONSHIP FRIDAY, click below …