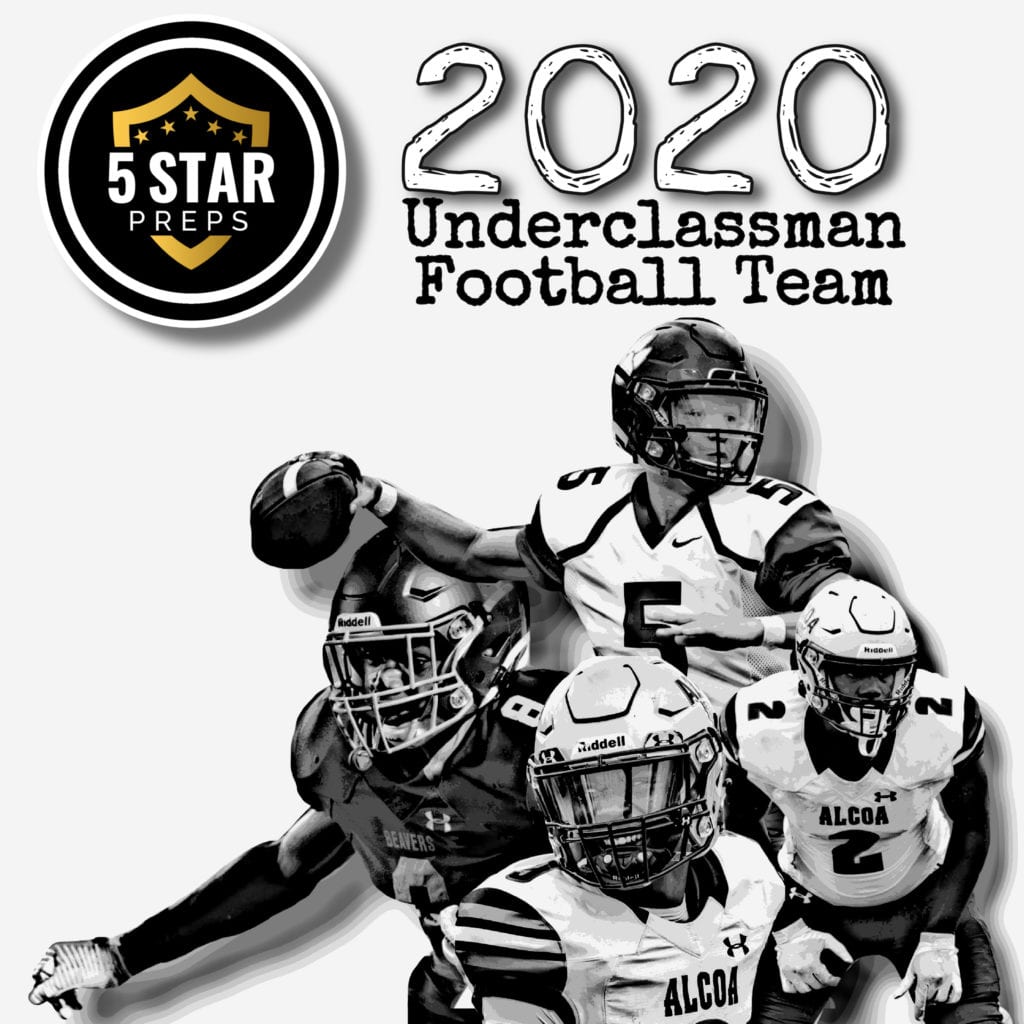 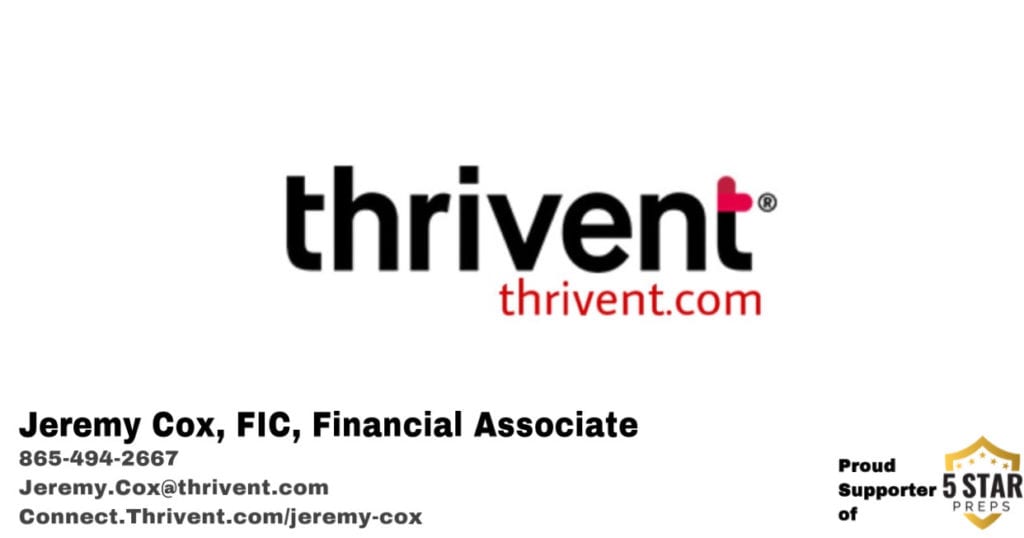 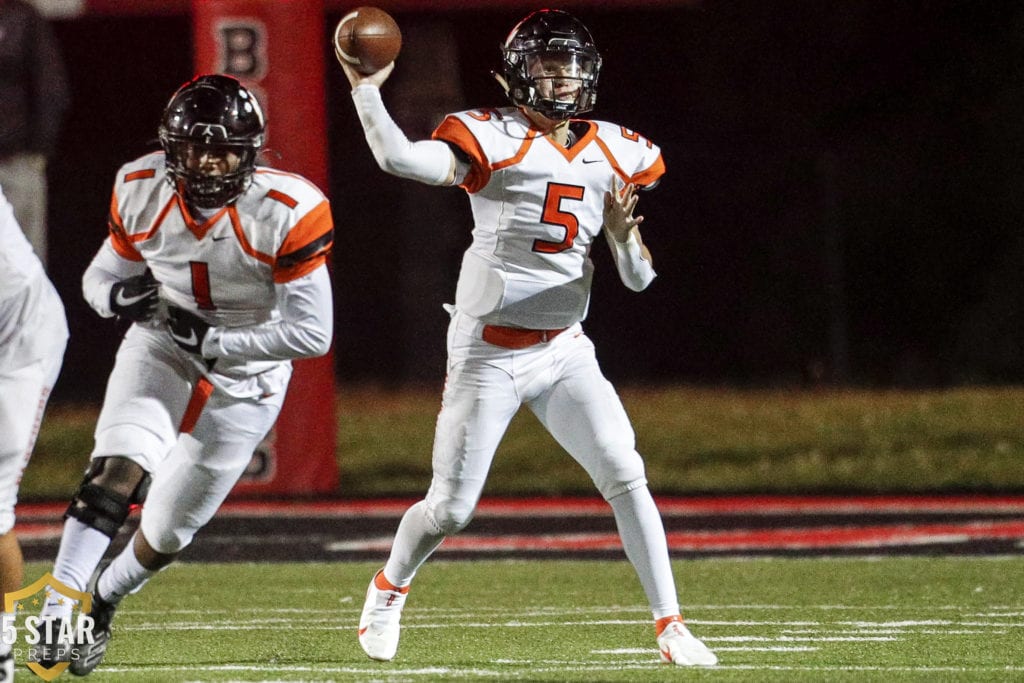 Jordyn Potts of the Powell Panthers on Saturday, Sept. 19, 2020. (Photo by Danny Parker)

Jordyn Potts (Powell, sophomore): The 2020 Class 5A Mr. Football semifinalist threw for 2,590 yards and 28 touchdowns in his first season as a starter.

Walker Martinez (Anderson County, sophomore): Martinez took over as starter midway through the season and threw for 1,567 yards and 23 touchdowns.

Zach Lunsford (Alcoa, sophomore): Lunsford threw for 1,107 yards and 12 touchdowns during the Tornadoes march to a 3A title.

Brady Quillen (Greeneville, sophomore): Took over as starter after Drew Gregg was injured; led Greene Devils to 4A state quarterfinals with 1,015 yards and 12 touchdowns. 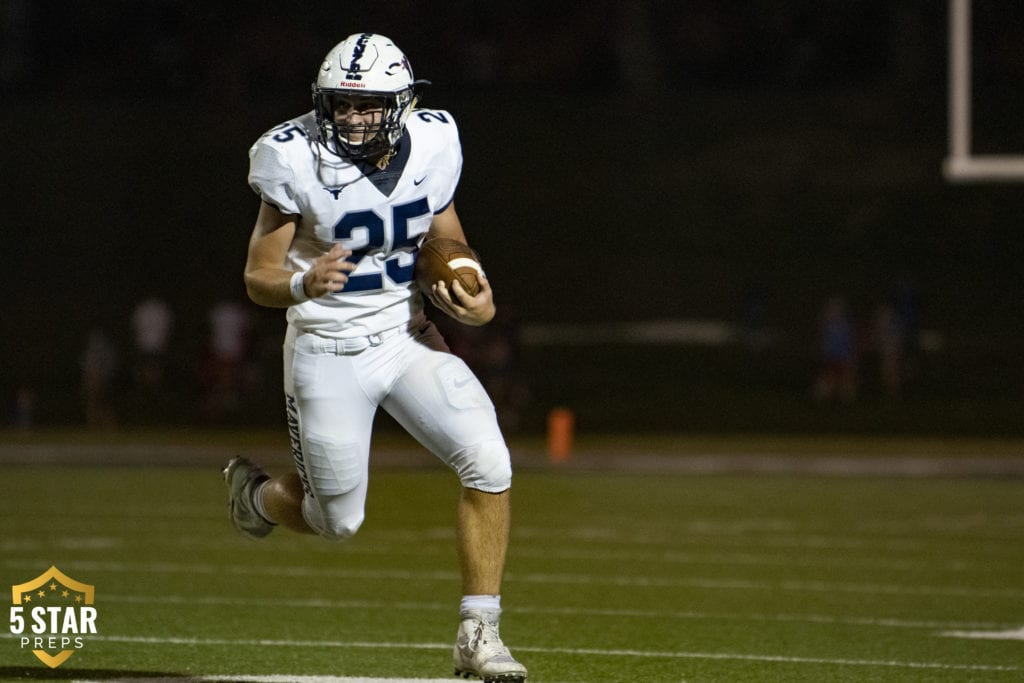 Trevon Barfield (West, sophomore): One of the fastest players in town, Barfield ran 57 times for 800 yards and scored 10 touchdowns while splitting carries with three other backs.

Nate Stephens (Elizabethton, sophomore): The Cyclones repeated as 4A state champions, and Stephens ran 98 times for 908 yards and 15 touchdowns.

Ethan Ledford (Morristown East, sophomore): The Hurricanes went 5-5 and reached the 5A playoffs thanks to 177 carries, 1,083 yards and seven TDs from Ledford. 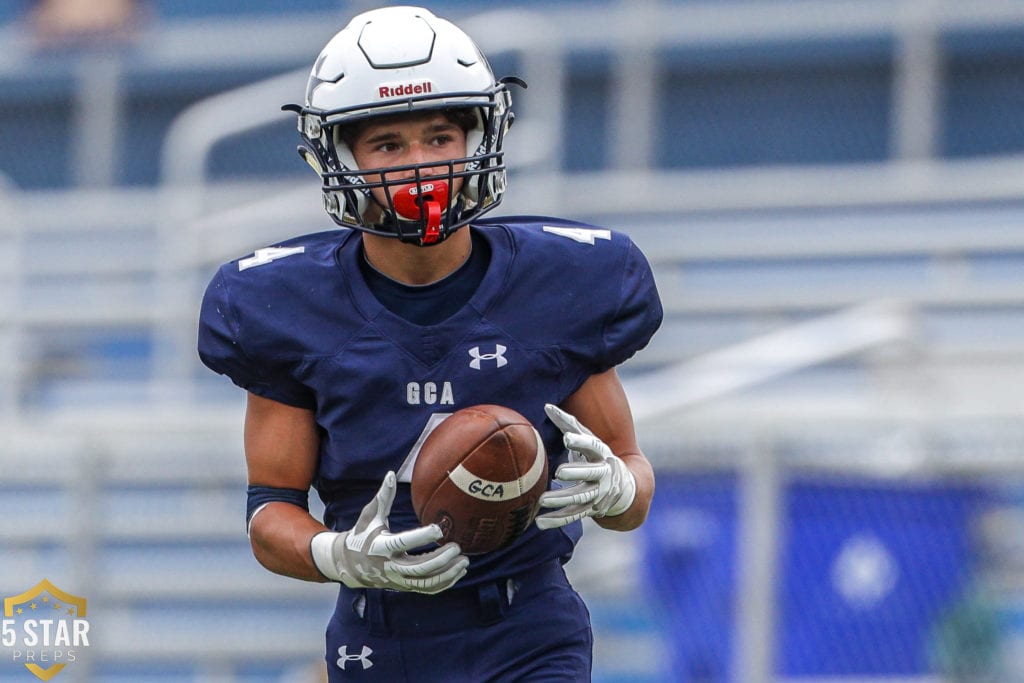 Pierce Browning (Grace Christian, sophomore): One of the most productive receivers in the area, Browning caught 91 passes for 1,314 yards and nine touchdowns.

Ayden Greene (Powell, sophomore): Greene erupted onto the scene this season with 35 catches for 566 yards and seven scores; also averaged 38.7 yards per punt.

Nolan Faust (Halls, sophomore): Faust has unrivaled speed and put that to use for the Red Devils with 590 yards receiving this past season. 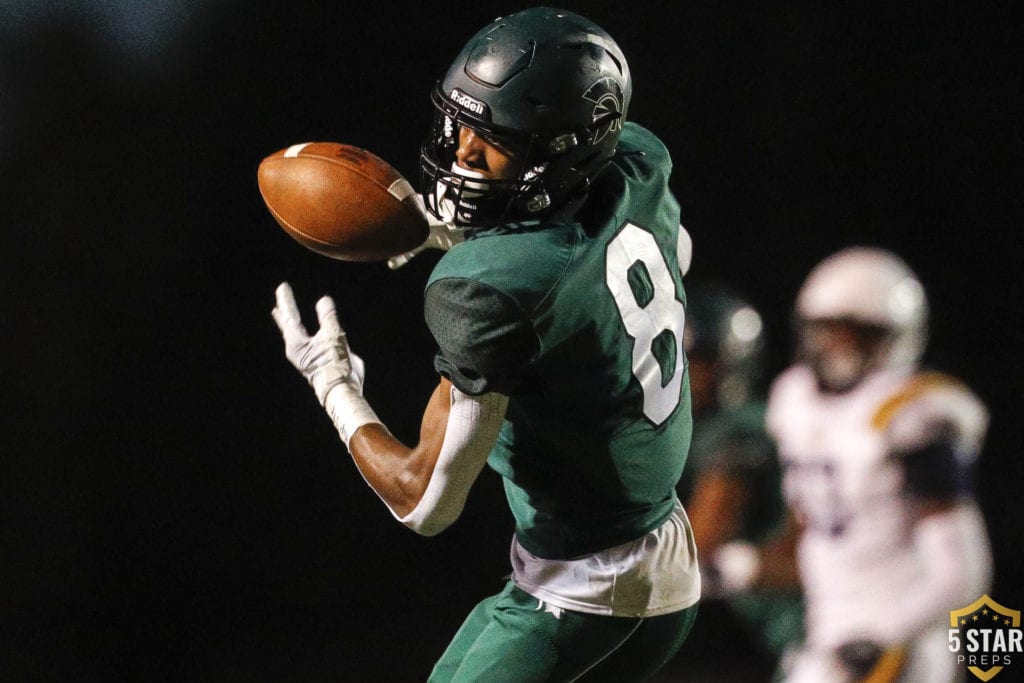 Brandon Winton (Webb, freshman): Known for his basketball talent, Winton proved equally as talented on the field. He ran 54 times for 396 yards, caught nine passes for 215 yards and made 43 tackles with eight pass breakups.

Ashton Aucker (William Blount, sophomore): The diminutive Aucker came up big for the Govs with 38 catches, 556 yards and six TDs; he finished with 1,079 all-purpose yards and had four interceptions.

Sam O’Leary (Catholic, sophomore): O’Leary’s game screams next level, and he had 17 catches for 291 yards and two TDs for the Irish; He ran nine times for 60 yards; he also broke up two passes and caused a fumble.

Charlie Robinson (Webb, sophomore): Webb’s quarterback in 2020 threw eight touchdown passes, rushed for four, had more than 1,100 all-purpose yards and made 58 tackles as a defensive back.

Noah Vaughn (Maryville, sophomore): Vaughn forecasted bigger things to come with 42 carries for 206 yards and four touchdowns and 39 catches for 404 yards and four scores for the Rebels in 2020.

Jai Hundley (West, sophomore): Hundley made an impact for a second year in a row, rushing 86 times for 473 yards and three touchdowns; also had two receiving touchdowns. 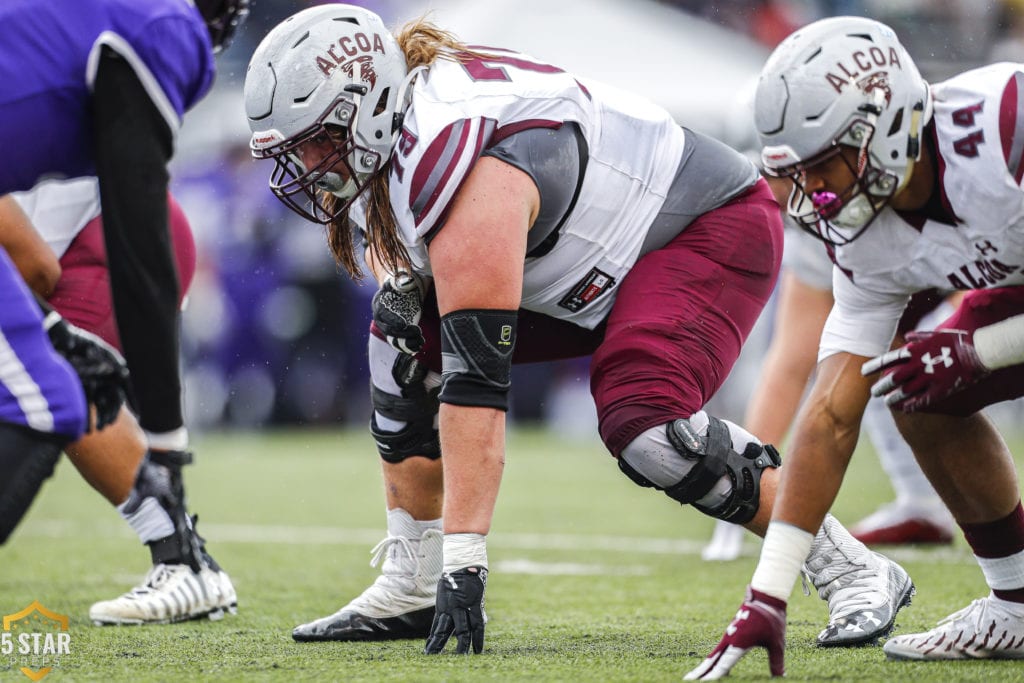 Lance Williams (Alcoa, sophomore): The 6-4, 300-pound tackle led Alcoa to another 3A state title; he recently picked up an offer from Kentucky.

Cal Grubbs (Maryville, sophomore): The 6-4, 270-pound center started for the 13-1 Class 6A semifinalist Rebels and was named All-Region.

Max Hull (South-Doyle, sophomore): The 6-4, 250-pound Hull started all 14 games at right tackle during the Cherokees’ run to the 5A state semifinals.

Hunter Heinrich (Central, sophomore): An all-region center, the 6-1, 240-pound Heinrich started all 13 games for the Bobcats.

Devin Lively (Catholic, sophomore): The 6-3, 280-pound Lively started at center for the Fighting Irish this past fall.

Nehemiah Storey (Rockwood, sophomore): The 6-2, 260-pound Storey is a menacing competitor on both sides of the ball for the Tigers, setting up shop on offense at right tackle. 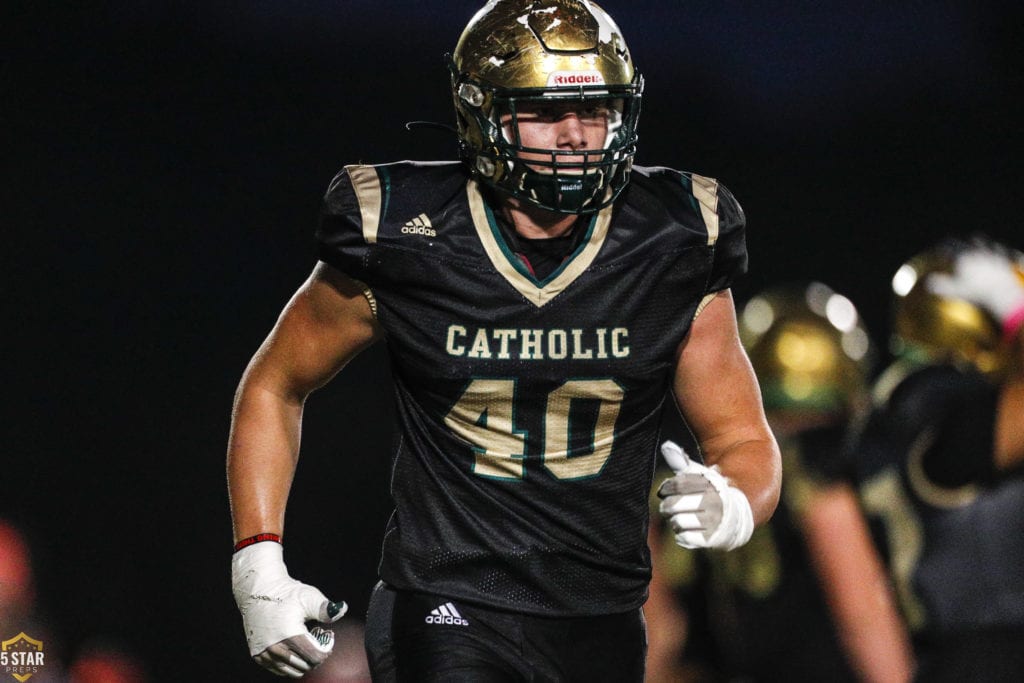 Trevor Duncan (Catholic, sophomore): The 6-5, 240-pound Duncan is one of the area’s most promising prospects and put in work at defensive end and tight end for the Irish.

Daven Cozart (Catholic, sophomore): The 6-3, 270-pound Cozart proved to be an all-region performer for the Irish this past fall.

Mason Hatfield (Kingston, sophomore): The all-region defensive tackle made 68 tackles for the Yellowjackets with four sacks and seven tackles for loss. 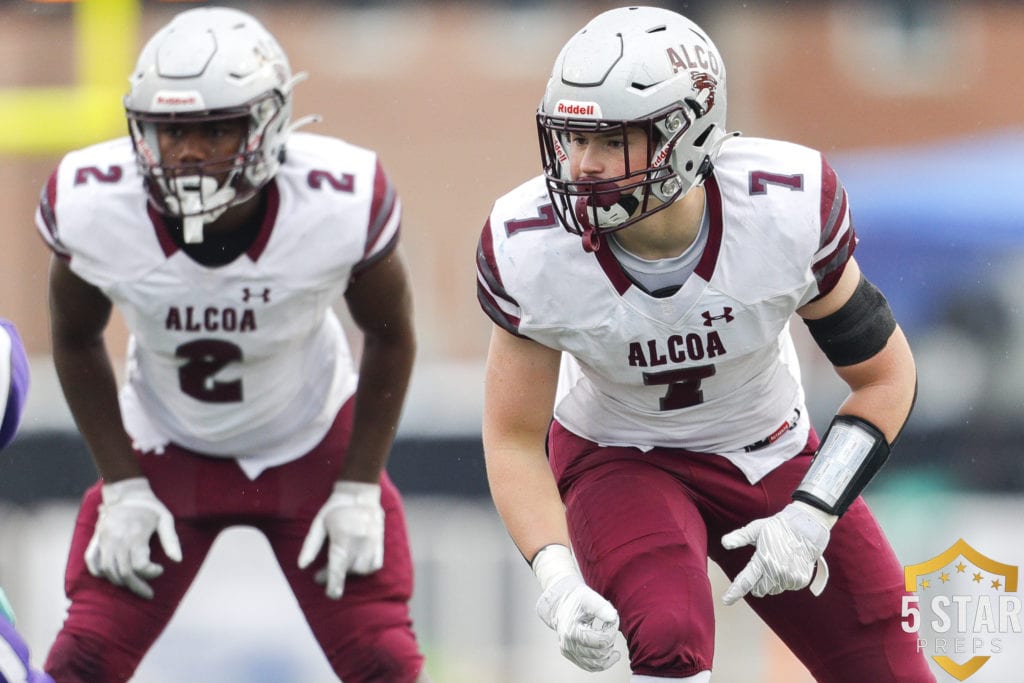 Linebacker Elijah Cannon (7) and Aaron Davis (2) of the Alcoa Tornadoes prepare for the snap against the Milan Bulldogs in the TSSAA Division I Class 3A state championship at Tucker Stadium in Cookeville, Tenn., on Friday, Dec. 4, 2020.  (Photo by Danny Parker)

Elijah Cannon (Alcoa, freshman): As the season wore on, Cannon became more and more involved with Alcoa’s game plan on offense and defense. As a linebacker, he made 45 tackles, with 6.5 tackles for loss, two interceptions and two defensive scores.

Brian Kelley (Oak Ridge, sophomore): Oak Ridge reached the 5A finale, and Kelley helped with 95 tackles and 10 tackles for loss.

Luke Pendergrass (Meigs County, sophomore): The middle linebacker racked up 78 tackles with seven tackles for loss during the Tigers’ run to the 2A BlueCross Bowl.

Garrett Hawkins (Sevier County, sophomore): The all-region linebacker was one of the top tacklers in 2020 with 138 made. 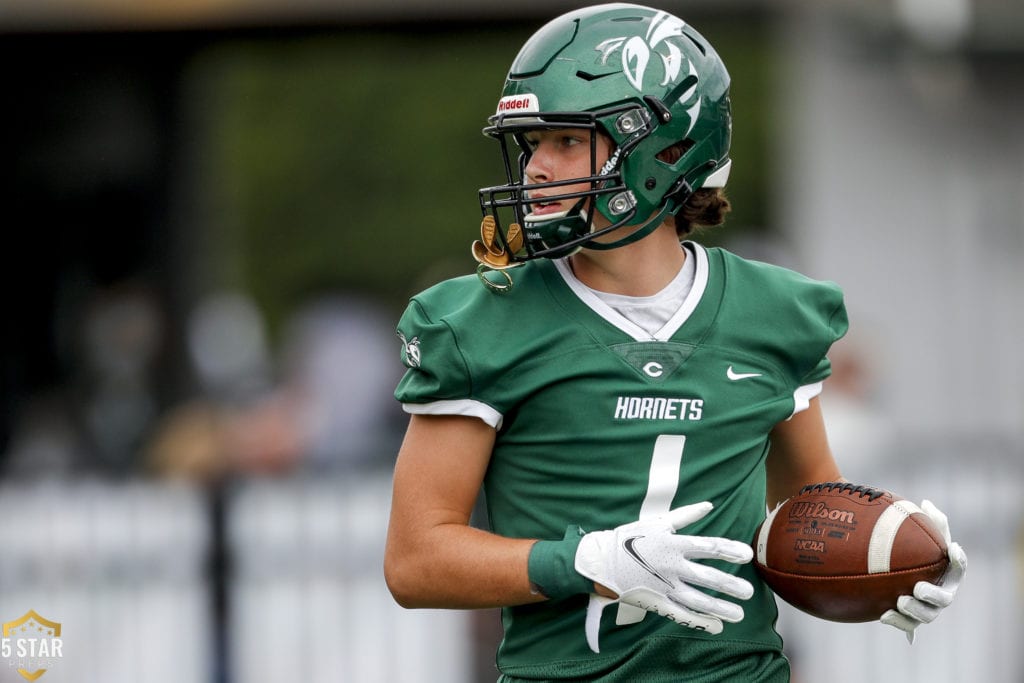 Brody Blankenship of the Carter Hornets on Friday, Aug. 21, 2020. (Photo by Danny Parker)

Hassan Al-Sultani (Pigeon Forge, sophomore): Al-Sultani has big-time-prospect energy about him. He made 77 tackles with two interceptions in 2020.

Garrett Weekly (TKA, sophomore): Weekly came up big on offense and defense, the latter of which featured him making 52 tackles, seven interceptions and six pass breakups.

Marshaun Bowers (TKA, freshman): The 2019 Defensive Underclassman of the Year backed that up with 41 tackles, four INTs, nine pass breakups and two defensive TDs in 2020.

Trey Wilhite (Lenoir City, freshman): Wilhite made an instant impact on the varsity level, piling up 104 tackles with six tackles for loss, six PBUS and two interceptions (one for TD).

Jordan Harris (Alcoa, sophomore): A major contributor on both sides for Alcoa, Harris rang up 41.5 tackles, 4.5 tackles for loss and a team-high five pass breakups.

Cade Russell (Elizabethton, sophomore): Russell made 51 tackles and six interceptions to go with 824 all-purpose yards for the defending state champs.

Elijah Rogers (West, sophomore): One of the state’s top prospects in 2023, Rogers made 33 tackles with three interceptions this past season.

Ja’Qurrius Wrenn (West, sophomore): Wrenn put himself on the map this past fall with 54 tackles and three interceptions. 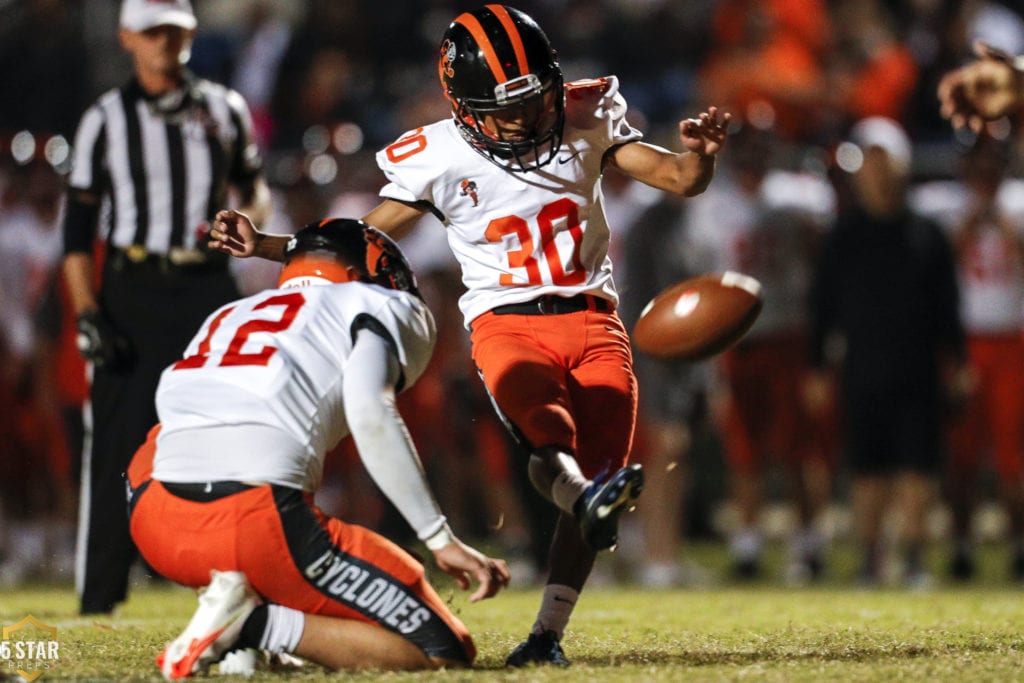 Sean Smithdeal (Elizabethton, sophomore): Smithdeal rang up 96 kick points for the state-champion Cyclones. He made 84 of 88 PATs, four of six field goals and averaged 38 yards per punt.

Tyson Siebe (West, sophomore): Siebe made 48 of 53 PATs, five of eight field goals and sent eight kickoffs into the end zone for touchbacks.

Kole Hughes (Central, sophomore): Hughes stepped into the spotlight with 12 touchbacks this season, making seven of 12 field goals and 35 of 39 PATs.

Brock Taylor (Catholic, sophomore): Taylor booted through five of six field goals while also making all but one of his 29 PATs.

Reese Keeney (Farragut, sophomore): Keeney was perfect (30-30) on PATs and on field goals (3-3) while logging 13 touchbacks and three punts for a 42.7-yard average.