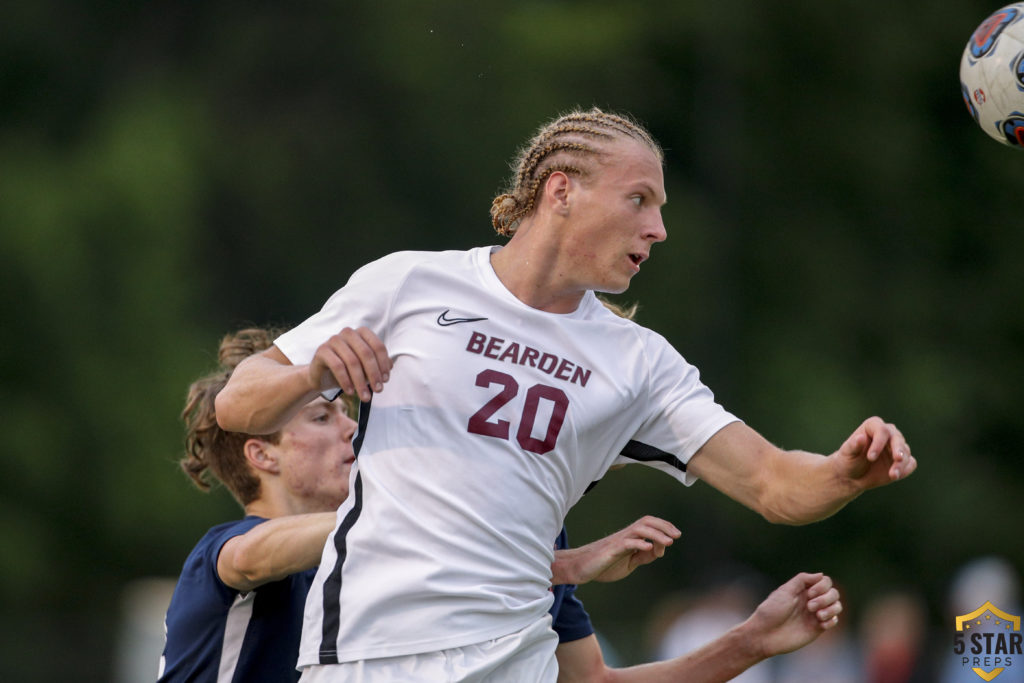 Lucas Nordin and the Bearden Bulldogs faced the Oakland Patriots in a TSSAA Class AAA state tournament semifinal at Richard Seigel Soccer Complex on Wednesday, May 25, 2022, in Murfreesboro, Tennessee. (Photo by Danny Parker)

Bearden’s Lucas Nordin has one regret about the 2022 soccer season.

He wasn’t full speed for the Class AAA state championship game in Murfreesboro.

Nordin, the 5Star Preps Boys Soccer Player of the Year, played in the 4-1 loss to Brentwood on May 27 with an Achilles injury sustained two nights earlier during the 3-1 semifinal win over Murfreesboro Oakland.

It was a crushing end to a remarkable season for Bearden (21-2-3) and Nordin, a junior forward whose 38 goals set the program’s single-season record.

“I know it’s the state championship,” Nordin said June 9. “You’re going to get a team’s best game. I played through it, but it’s frustrating I wasn’t 100 percent. That’s sports. Things like that happen.” 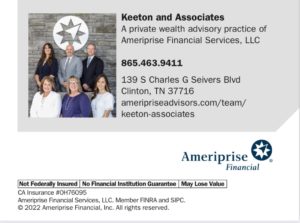 For over 125 years, Ameriprise has been committed to putting its clients’ needs first. CLICK THE LOGO above to meet Keeton & Associates from Ameriprise and let them assess and help your financial future.

“I don’t think he wanted anybody to know,” Radcliffe said, “because we were at the point of the season where everybody was rallying around him, and he was kind of our energy and our focal point, obviously, with much of our attack and much of our play. I think to his credit, he didn’t want anybody else to know, especially the rest of his teammates.”

Radcliffe found out about the injury shortly after the championship game during the bus ride back when Nordin showed him the swollen Achilles.

Three days after the championship game, Nordin was in a walking boot for Bearden’s postseason soccer banquet. He was scheduled to attend a camp at North Carolina State during the first week of June and had to cancel because of the injury. He didn’t start playing soccer again until June 8.

“I can run around and stuff,” he said, “but I can’t explode really hard off my right foot yet.”

Nordin said he got hurt when an Oakland player stepped on his Achilles, and doctors diagnosed it as a “micro tear where the fibers get really broken up” in the Achilles.

“Usually, you just get stepped on and walk it off,” he said. “That night, we had a day off before the state championship, I couldn’t stretch it. I was limping around, and I was like, ‘I don’t care what this is, I’m going to play through it regardless.’ I did not play like myself at all, which is so frustrating.”

Nordin set a goal when the season started – and had a bet – to break Bearden’s single-season goals record of 33 set by Gabe Alvarez in 2016.

He told his father, Jason, he would break Alvarez’s record.

Nordin entered the state quarterfinal against Franklin tied with Alvarez at 33 goals in 23 games.

His hat trick in the 4-1 quarterfinal victory over Franklin broke the record – and won the bet — and he scored two more in the semifinal win over Oakland when he got hurt.

Radcliffe called Nordin’s breaking the record “remarkable” considering the competition and game-planning he was facing.

“He wasn’t a no-name,” Radcliffe said. “He made an impact last year and people obviously knew who he was and game-planned for him. To have that production, and you’re facing teams that are scouting you and watching you, it’s just remarkable. It shows how he bought into what we wanted him to do. We knew that he wasn’t just going to be able to take the ball and dribble past four or five people at a time. He had to incorporate others to then get the ball back.

“And as a coach, I don’t schedule easy games. To set a school record with what I always say is one of the toughest schedules in the state, it speaks for itself. We were playing top teams not only in Tennessee but across the country, and I think that’s a huge mark for him, and the best part is he wants to surpass it next year.”

ALL IN THE FAMILY

His older brother Tyler, a 2020 Bearden graduate, was a standout basketball player for the Bulldogs and appeared to be bound for college ball before suffering a knee injury his senior year.

Their younger brother Justin, a freshman at Bearden, is a point guard for the Bulldogs’ basketball team.

“They’ve played a couple of games (this summer), and he’s already getting minutes at point guard,” Lucas said of Justin.

Lucas also played basketball through middle school but stopped because of the difficulty of balancing it with soccer’s club and high school seasons.

Nordin had at least three college camps scheduled for this summer starting June 17-19 at Louisville. He’s also scheduled to go to camps at Clemson and North Carolina.

“I’m mainly focused on getting recruited for college ball,” he said of the summer. “I’m going to a few camps. I want to play at a big school. ACC would be awesome. That’s the league I’m hopefully going to play in, but I’m just working on my craft and hopefully getting things figured out for college.”

Radcliffe said Nordin has what it takes.

“He’s got the physical attributes that make a special player,” Bearden’s coach said. “He’s big. You can see him when he steps on the field just how broad his shoulders are and how strong his upper body is, and you incorporate his speed, and I just think his difference is his mentality. He wanted to be a difference maker this year.

“He’s one of those rare players I’ve coached who loves the attention. He loves people trying to come after him, and he loves the crowd noise because it makes him play harder. I think that’s his biggest attribute is he’s a competitor. He wants to win.”

Nordin wants a return trip to state in 2023, and he wants to leave with a state championship. The Bulldogs were state runners-up the past two seasons.

Bearden had 13 seniors on this year’s team.

“It will be a little bit of rebuilding for sure with our Bearden team, but I’m not worried at all,” Nordin said. “This is going to be my third year of going through the whole season of getting to the state championship, knowing all the emotions and what it takes to get there. It’s not my first rodeo. I know what it takes. I’m not too worried about getting there again.”